ROCKS AND BONSAI
Have You ever given a piece of rock much thought?

Imagine the rock heaved up from miles inside the earth's crust by earthquakes and volcanoes and then worn down by wind, water and glaciers splitting to form mountain chains and caverns that channel rivers.

Our earth wrapped in its thin skin of air, soil, water and plants is essentially a ball of rock whirling through space.

No wonder then that we derived comfort from being in contact with the earth's bare bones. Rocks have been used as tools, weapons, implements and building blocks and it seems fitting that they should also cater for our spiritual needs, making us aware of and closer to nature even though in the west we concede that stones, plants and animals are all inseparable parts of nature we find it hard to credit  Eastern beliefs that a rock has consciousness  perhaps because we can't measure it scientifically. 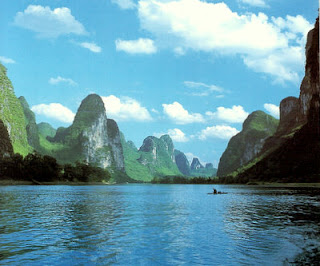 USES OF ROCK IN BONSAI

1.   Bonsai planted in or on a flattish or slightly saucer shaped rock instead of in a bonsai pot. This is not a difficult task, if the sides of the landscaped soil are a little steep a wall of muck over planted with moss may be necessary to stop erosion. If you live in a windy area stays may be glued to the rock and the tree secured in position with wire.

2.   A tree can be planted on a perfectly flat rock or a piece of slate with smaller rocks or pieces of slate, terraced or embedded into the slopes of the planting. Muck, moss and stay wires are, once again, useful aids. It may be necessary to drill a hole in the bottom to avoid water logging. Either a single or a group of trees may be used. 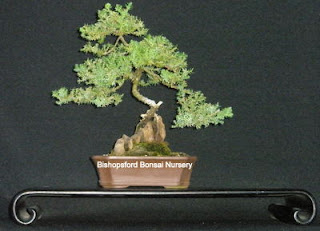 In this style the tree is clinging to the rock for its very existence. Either the rock could be small with the tree being dominant or the rock could be large and dominant and the tree small depending on the scene and perspective you have in mind. In either case the tree must be well attached to the rock. Elms, maples and figs are a few subjects which do well with their roots over a rock. It is very important that the roots fit well into the nooks and crannies of the rock so the initial planting or placing of the rock needs to be very carefully done. Secure the roots to the rock with raffia, pantyhose or muck, then plant in a pot with double the soil capacity that one would normally use. After a few months the soil can gently start being removed from the surface. It is very important that rock and tree blend into a harmonious unit and do not remain just a tree over a rock.

4a.  A landscape scene with a largish rock suggesting a large mountain with minute trees outlined against the sky. Planting and maintenance here needs to be meticulously done. Tree should be well secured with stay wires (strand of thin copper wire epoxy glued to the rock) and muck. Trees must be kept well trimmed and small. Suitable subjects are box honeysuckle, j. procumbens and j. procumbens nana, sargent juniper and catlin elms.

4b.  A variation of this could be a tall thin rock with trees perched on outcrops cascading downwards.

4c.  A third variation could be a water and rock landscape in a marble or very flat tray either with or without trees. Rocks should have flat bases and be cemented to the pot to form a watertight "river" the imagination can then go to town as far as trees, landscaping etc. 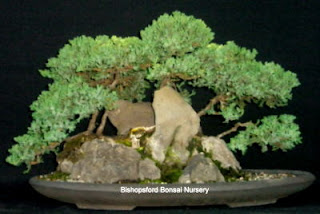 5.   There are occasions when a rock partially buried next to a tree can enhance a tree or add greatly to the illusion you are trying to create. In the first instance a bonsai might have an exposed root system which suggests instability, positioning a rock carefully can give the illusion that the base of the tree is well balanced and stable. If you are trying to copy a scene in China where often you see people sitting on boulders or outcrops of rock and fishing from rivers or lakes then this can easily be achieved by combining a beautiful tree, rock and appropriate sized figure. The whole scene must be a harmonious unit not simply a tree, rock  and figure in a pot.

6.   An art form allied closely to bonsai is ofcourse suiseki or Gong-shi , the appreciation of beautiful stones. These stones are often displayed with bonsai adding to the effect of trying to encompass nature.