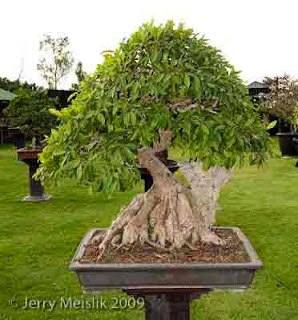 by Gail Theron
To create a Root-over-rock Ficus does not really involve much more work or time than a 'normal' bonsai yet it adds such interest and stature to your collection. Ficus are excellent subjects for this style as their roots very quickly fatten up, fuse together and look as if they have been perched on the rock for many years.

I have tried several different methods of developing this style.

1.    From a young tree: I take either a thickish-rooted cutting or a tree of 1-2 years old which has fairly flexible roots. The tree must be designed in conjunction with the rock. Once this is done I position the roots over the rock into the relevant crevices and place the tree and rock in a container I have chosen to suit the tree and rock in size, depth and colour. I use my normal fairly coarse potting medium and mound the soil right up to the trunk and cover the mounded soil snugly with pantyhose. As soon as the roots are growing strongly in the soil I remove the mound of soil from around the rock. It is important to 'sort out' your roots just as you do your branches, eliminate all crossing roots and those giving you conflicting lines. Pay particular attention to the way the roots fatten up as it can easily happen that one root becomes heavier than the trunk which looks unsightly, while others remain thin. By trimming just the heavy root you can keep it under control otherwise it might be better to remove it entirely.

2.    A more developed tree: A tree which has been in training for four or five years would be suitable. If the heavy roots are inflexible or in the wrong place I simply remove them and use the younger roots which thicken up very quickly. The procedure is the same as with the younger tree. I prefer not to bury them in the ground as I find I have more control over the tree in a large pot. I also prefer to use a coarse mix rather than muck, as the roots elongate far quicker.

Before attempting a root-over-rock style it is important to decide what kind of scene you want to create. Are you trying to capture a tree clinging for dear life to a high pinnacle? In this case both your tree and rock should be rugged as if they have been battered by the elements. If you are trying to capture a gentle more tranquil atmosphere where a seed has grown in the crevice of a rock and developed into a majestic tree you must choose your rock accordingly.

Your planting must be more than just a tree with its roots over a rock.

Email ThisBlogThis!Share to TwitterShare to FacebookShare to Pinterest
Labels: Root over Rock - Ficus