The Wonderful World of Figs

The wonderful world of figs 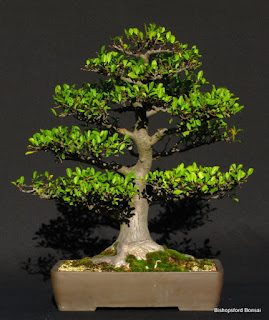 In warmer areas the figs are possibly the very best species of tree to cultivate as bonsai. They are chiefly from frost free climes and there are several hundred species, mostly from Asia, with 23 from South Africa. In the milder climates of the world figs are extremely popular and wonderful specimens can be seen in Florida, California, Hawaii and all over the Far East. They are extensively and successfully grown as indoor bonsai all over the world.
The leaves of most fig trees miniaturise obligingly if frequently nipped and pruned. The first leaves on new branch lets are smaller getting bigger as the branch lets extend and the inter-nodal distances become longer. Always nip in front of a small leaf and new ones come out still smaller.
These trees are often grown in upright and slanting trunk styles but they may also be grown as semi-cascade or even cascade styles. There are some very interesting group and clump styles. They all develop wonderful roots and exposed root, root-over-rock and even aerial roots can make stunning features on well designed trees. Surface roots are frequently outstanding focal points and much appreciated by lovers of bonsai. Roots exposed to light thicken easily, a feature that can be creatively exploited.
As the wood is soft jins are not an option, but shari can be incorporated into designs although the tendency will be for them to heal over.
Figs are most obliging and forgiving trees to work with, if wired, the new positions are fixed quickly. Wired branches have to be watched carefully lest they develop scars from wire biting in. They put on new branches everywhere from dormant nodes. They possess strong apical and terminal dominance so it is necessary to control the ends of branches and the apex so that they do not become too dominant.
These trees can well be used for advanced bonsai techniques such as grafting and several trees can be intertwined or wrapped together for spectacular effects. They fuse quickly and easily and very impressive nebari can be formed. Wrapped around rocks they grasp the rock in a relatively short time and the composition becomes a cohesive unit. Root-over-rock is easily managed but be careful to use rocks of sufficient stature and size lest the rock becomes lost in a jungle of roots.
Diseases such as black spot or late blight may be controlled by spraying with Rosecare while aphids, scale, mites and mealybug may be sprayed with Chlorpiriphos or Garden Gun.
Caterpillars and snout beetles are controlled by spraying with Garden Ripcord. They are sometimes attacked by a wood boring worm which can have devastating results. If you notice sawdust, look for a hole in a branch or trunk and with a hypodermic syringe, inject a standard dilution of Metasystox and water, which should kill the worm. Sometimes it is useful to probe the hole with a piece of wire and thus remove the pest.
Figs are gross feeders and for a healthy appearance they need regular fertilizing combined with frequent nipping.
We have worked with the following varieties:
A very desirable fig with narrow leaves similar to the willow tree which miniaturizes very well. They present excellent growth patterns, develop fine branch ramification as well as good surface roots and trunk taper. The very prominent aerial roots may be incorporated into imaginative and creative designs. Exceptionally good as bonsai.

Really great bonsai specimens may be seen in the warmer Asian countries. These trees develop magnificent broad bases and wonderful canopies of dense foliage with complicated and intricate branch patterns. They have all the attributes needed for good bonsai and amazing results can be attained in a relatively short time.
A tropical variety with fairly stiff growth habit. Two suitable horticultural variations are f. benjamina nana and f. benjamina varigata.

Ficus-religiosaThis is the bodhi or peepul tree with very attractively shaped but rather large leaves. It is a tropical tree and due to the very large leaves not particularly suitable for bonsai cultivation. The leaves miniaturize considerably but even at one twentieth of their natural size are still big. The tree has significance in many Oriental religions, for example it is the tree under which the Buddha sat meditating when he attained enlightenment.
The following are figs indigenous to South Africa which have been tried as bonsai - botanical names are used throughout as there seems to be some confusion with common names.
These trees have very good surface roots and trunk bases but the leaves are rather large although they do miniaturize. The petioles are long so that the mature leaves hang down.

Ficus-bizanaeThere are numerous variations of this tree some with very small leaves and short inter-nodal distances.They make excellent bonsai from shohin sized upwards. The leaves are usually greyish-green.

Ficus-craterostomaSimilar to natalensis and thonningii but the ends of the leaves are usually (but not always) truncated. There are some excellent bonsai specimens. Because of its somewhat stiff growth habit it is not quite as good as natalensis.

Rather large and longer leaves and "difficult" growth patterns. The writer has never seen an excellent specimen.

Ficus-natalensisBecause of the ease with which natalensis and thoningii can be confused they are handled together. This is surely one of the best indigenous figs for bonsai cultivation. They have all the horticultural advantages plus very pleasing growth patterns. There is a mutant available with narrow and smaller leaves which looks promising for our practice.
There are some very good bonsai specimens around. The leaves are large but do miniaturize to an extent Not as good as natalensis.
Undoubtedly the best trees for indoor cultivation, figs come from warmer parts of the globe and naturally do not require big temperature differences and rest periods. They are tolerant to a wide range of humidity levels. In common with all hard wood subject they need high levels of light for photosynthesis to operate ideally so they should be kept in a bright spot or under artificial light.
If you haven't yet tried a fig it's time to do so - you will not be disappointed!