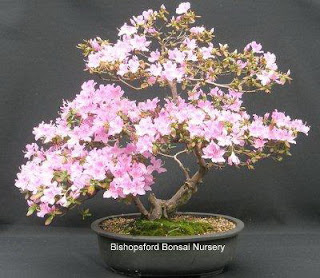 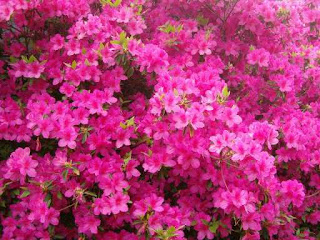 Gentle, serene, tranquil, lovely, stunning, gorgeous, charming, delightful, exquisite are some adjectives used to describe azaleas - therefore, it is hard to imagine that azaleas made their debut into history by causing the demise of two armies. The story goes that around 400 BC a Greek army camped along the Black Sea became dangerously ill after eating honey made from the Pontic azalea growing in the area – 300 years later a Roman army was massacred at the same location after becoming stupefied from eating honey from the same source.

Azaleas can be deciduous or evergreen. Evergreens originate from China, Korea, Taiwan and Japan.

The deciduous ones are found in Southern Europe, Japan and China. Over half hail from the Eastern USA and Canada. In the sixteen hundreds azalea culture boomed in Japan and by the nineteen hundreds was firmly established in the West but thanks, mainly due to the Japanese there are now many thousands of hybrids.

Satsuki, Kurume and some garden varieties lend themselves particularly well to bonsai culture and with planning you could have bonsai in flower for most of the year. There are thousands of hybrids in the most astonishing range of vibrant colours and shapes. There is a huge following, in Japan and elsewhere of azalea enthusiasts resulting in exhibitions and magazines solely devoted to Azaleas.

They like good light, preferably morning sun and dappled shade. They do not like fierce direct sun and strong drying winds.
They love water but need a soil that drains well, is moisture retentive, acidic and rich in organic matter (our mix of 60% compost and 40% coarse gravel with acid peat added works well). They are unforgiving if allowed to dry out totally and they love their foliage misted.
They like a pH of between 4,5 and 6,5.
They are shallow rooted with a dense mat of fibrous roots containing mycellia. Mycorrizal association describes root fungi (mycellia) and live in or on the roots of plants in a symbiotic relationship called mycorrizal association. The plants provide carbohydrates for the infecting fungus and the fungus enhances the plant assimilation of essential nutrients. In the case of azaleas a mycelium is internally situated in the roots of the plants. They have “lazy” roots which have difficulty penetrating from one medium to another, for this reason they are often initially unstable and definitely need to be wired into their pots.They shoot from hard wood
They are basely dominant and apically weak.
They have extremely thin bark which marks easily.
There are very brittle.
A well planned feeding and pruning programme will give you a good display of flowers but first concentrate on creating a good bonsai. The flowers are an added bonus – we are growing bonsai not potted azaleas. 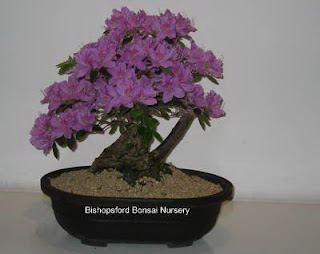 They are highly suitable for most styles. For more details see; John Naka’s Bonsai Techniques for Satsuki – 1979.

Styling can either be by pruning or wiring or both.
Bark should be protected with raffia when wiring and too thinner strand of wire are preferred to on thick strand.
Pruning is done at different times of the year to accomplish different purposes.
Bud thinning can be utilised if you want an even, stylistically arranged distribution of flowers which all bloom at the same time.

Generally azaleas seem to be rather pest free but can be attacked by; mites, white fly, scale and various chewing insects.

The biggest problem I have encountered is chlorosis which can be either lime induced or can be inherent in the plant’s cell sap. If it is a problem of the pH of the soil the pH may be lowered by using magnesium sulphate (Epsom salts or ammonium sulphate). If it is an internal plant problem there does not seem to be much that can be done. 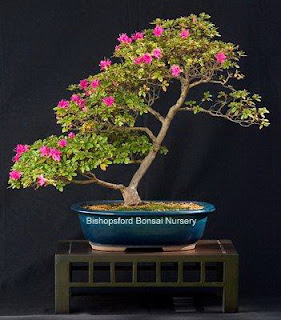 MY PROGRAMME FOR SATSUKI AND KURUME AZALEAS

1. Flowering – dead head
2. Plant is dormant
3. Period of flowering depends on aims and method
4. Pruning – only the odd rogue shoot
- don’t upset the balance of the tree

Pruning
New trees – hard design pruning
Developed Trees – new growth at the ends of each tip one to six shoots. If you need length and breadth leave one or two shoots. In addition twigs can all be cut back.

Azaleas are re-potted after flowering when they start their new growth period.

Azaleas must always be secured into the pot because although they usually have a dense mat of fibrous root this is slow to penetrate into the new mix making the tree unstable in the wind
I use the wedge method which seems to suit the fine roots better and ensures that with root pruning you don’t keep cutting the root tips off with the mycelium.
provide there is enough fibrous root hard roots can be totally removed
Soil must drain well, be water retentive and acidic – gravel, compost and peat
Frequency of re-potting – only when roots reach the reach the limits of the pot – 2 to 3 years

Stop nipping and pruning – growth should now be balanced and buds are developing
Protect from south Easter and fierce sun
Water diligently
Fertiliser – feed for flowering – 3:1:5 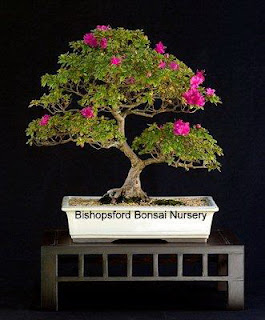 Email ThisBlogThis!Share to TwitterShare to FacebookShare to Pinterest
Labels: Azaleas